No it won't. It's the privatization of water supplies that will deny people water. Two articles... 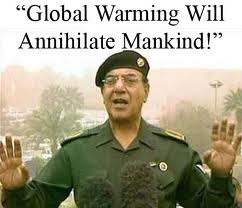 Almost half of humanity could lose clean water access due to climate change, according to a British report to be released tomorrow ahead of an international climate change conference in Mexico.

Meanwhile, as the planet continues to cool, we get more scare tactics about global warming...

Global warming is now such a serious threat to mankind that climate change experts are calling for Second World War-style rationing in rich countries to bring down carbon emissions.