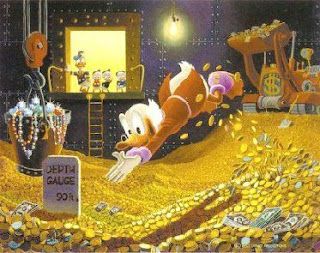 
"There's nothing surer; the rich get rich and the poor get poorer," was a slogan of the roaring 20s. The famous phrase was adapted from "Ain’t We Got Fun," a popular song recorded in 1921. So what’s new in America in the first decade of the 2000s?

Nothing! America’s top 72 wage earners averaged 84 million
dollars each in income in 2009, according to Social Security Administration data. The richest 1 percent of us earned 24 % of the nation's total income, the highest since 1928, just before the Great Depression. On the other hand, 14.3 % were living in poverty in 2009, according to the U. S Census Bureau. 50 million people from 17.4 million families are so poor they couldn’t buy sufficient food last year. About one million children from more than a third of these households missed meals regularly according to a recent study by the Department of Agriculture. At dinner, families gather to share together. But for the children, dinner time can be the cruelest part of the day. Almost 1 in 4 of them doesn’t know when they will have their next meal.

Because there is a high turnover and many homeless people stay hidden, homeless and hunger counts are only estimates. The Department of Housing and Urban Development reported a count of 643,067 homeless persons nationwide on a single night in January 2008. 1.6 million used emergency shelters or transitional housing during 2007/2008, suggesting that 1 in every 50 persons in the US used the shelter system at some point. 170,000 families lived in homeless shelters.


Feed the rich, starve the poor...

Cutting the Deficit: Sacrificing Workers to Save the Rich
“There’s class warfare, all right, but its my class, the rich class that’s making war and we’re winning” Warren Buffet

The most important and popular social and tax programs in the United States are threatened by a self-styled “Bipartisan National Commission on Fiscal Responsibility and Reform”. Appointed by President Obama on February 18, 2010, co-chaired by two longstanding champions of Wall Street: ex Senator Simpson (R, WY) and former Clintonite White House Chief of Staff Erskine Bowles. The Commission Report issued November 10 proposes to slash social security payments, reducing recipients to poverty, raise the retirement age to 69 ensuring that millions of workers will die before they can retire, or enter retirement in ill health; reduce or freeze cost of living increases through inflation indexes which understate by half the rises in food, gas, hospital and education. The Commission proposes deep cuts in Medicare, increased Medicaid co-pays and slashing $54 billion from graduate medical education. The Commission proposes to eliminate tax breaks including deductions for home mortgage interest payments while taxing employer provided medical insurance.

The same Commission Report proposes to reduce capital gains and income taxes for the rich by up to 24%.

President Obama and the Republican leadership praised the Commission and wants “to give them space to work on it”.

The so-called crisis of Social Security is a result of the Republican and Democratic governments siphoning off payments into the general fund. The forthcoming shortfall (2030) can be easily remedied by lifting the payroll tax ceiling, for the rich, taxing all earned income.

Medical costs can be reduced by 50% by replacing the for profit corporate health insurance and pharmaceutical corporations with a non-profit national health system, similar to successful programs in Europe and Canada.

Both Medical plans and Social Security can be easily funded by imposing a 1% sales tax on the sale of stocks and bonds.

The deficit proposals put forth by Obama’s Bipartisan Commission threaten to push the one-third of retirees who depend mainly on their social security payments into the food kitchens or destitution. The added cost and reductions in health care will increase the mortality rate among working families. The increase in retirement age will result in “work until you die”, with no time for leisure, travel or grandchildren. It is time to send a message to Washington: cut Social Security and Medicare and home interest deductions and you will visit Washington on your own time.
Link:
http://globalresearch.ca/index.php?context=va&aid=22149
Posted by Wallyworld