Is this part of the Obama health care program?

Everyone has a drug coverage plan now... 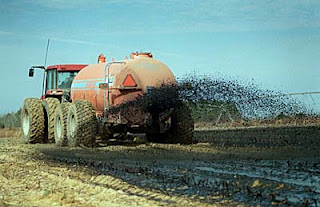 Agricultural crops can absorb pharmaceuticals found in the water used to irrigate them or the sewage sludge used to fertilize them, according to a study conducted by researchers from the University of Toledo-Ohio and published in the journal Environmental Science & Technology.

When humans consume pharmaceuticals, active traces of those drugs are excreted in their feces and urine. Modern treatment methods for water and sewage do nothing to remove these biologically active chemicals.

Previous studies have shown that crops grown directly in animal manure can absorb veterinary drugs, and that cabbages grown hydroponically can absorb human drugs. To simulate more natural agricultural conditions, researchers grew soybeans -- the second most widely planted crop in the United States -- in regular soil. Half the crops were fertilized with solid waste, while the other half were irrigated with chemical-spiked water. In order to simulate the reclaimed sewage or wastewater commonly used in industrial agriculture, the researchers spiked water and waste with the drugs carbamazepine (an anticonvulsant), diphenhydramine (Benadryl) and fluoxetine (Prozac), along with the common antimicrobial chemicals triclosan and triclocarban.