The Boomers are bumbed... 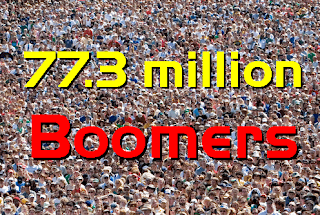 In 2011 The Baby Boomers Start To Turn 65: 16 Statistics About The Coming Retirement Crisis That Will Drop Your Jaw

The following are 16 statistics about the coming retirement crisis that will drop your jaw.....

#2 According to one recent survey, 36 percent of Americans say that they don't contribute anything at all to retirement savings.

#3 Most Baby Boomers do not have a traditional pension plan because they have been going out of style over the past 30 years. Just consider the following quote from Time Magazine: The traditional pension plan is disappearing. In 1980, some 39 percent of private-sector workers had a pension that guaranteed a steady payout during retirement. Today that number stands closer to 15 percent, according to the Employee Benefit Research Institute in Washington, D.C.

#4 Over 30 percent of U.S. investors currently in their sixties have more than 80 percent of their 401k invested in equities. So what happens if the stock market crashes again?

#5 35% of Americans already over the age of 65 rely almost entirely on Social Security payments alone.

#6 According to another recent survey, 24% of U.S. workers admit that they have postponed their planned retirement age at least once during the past year.

#8 Pension consultant Girard Miller recently told California's Little Hoover Commission that state and local government bodies in the state of California have $325 billion in combined unfunded pension liabilities. When you break that down, it comes to $22,000 for every single working adult in California.

#9 According to a recent report from Stanford University, California's three biggest pension funds are as much as $500 billion short of meeting future retiree benefit obligations.

#10 It has been reported that the $33.7 billion Illinois Teachers Retirement System is 61% underfunded and is on the verge of complete collapse.

Read them all:
http://endoftheamericandream.com/archives/in-2011-the-baby-boomers-start-to-turn-65-16-statistics-about-the-coming-retirement-crisis-that-will-drop-your-jaw
Posted by Wallyworld