"The voluntary exposure of the brain to microwaves from hand-held mobile phones... [is] the largest human biological experiment ever," says Leif Salford, Head of Research at Lund University, Sweden... 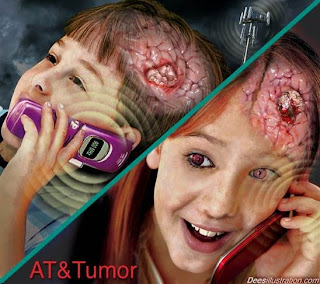 Ten ways to protect yourself from harmful cell phone radiation

You've probably heard that cell-phone usage could expose you to unhealthy levels of radiation. With 1.9 billion cell phone users worldwide (208 million alone in the U.S.), they have become a technological fixture and they're not going away anytime soon.

Research so far has been mixed, but some experts, like Dr. George Carlo, former chief scientist of the cell phone industry's $28 million safety research project, believes we could be on the verge of a major healthcare crisis. Specifically, he believes the world could be on the precipice of 500,000 brain and other cancer cases annually, because of the proliferation - and rising power - of cell phone technology.

Experts warn that research has already linked cell phone usage - theoretically, at least - to a range of ailments such as increased headaches, high blood pressure, earlier onset of Alzheimers and, of course, cancer. They say though such research is preliminary and much more is needed to be certain, effects of radiation are cumulative and affect different people in different ways - and on different time schedules.

So there's no time to waste in developing habits that will limit your exposure. Here are some ideas that can potentially reduce your risk:

1. Limit your time on the phone. Reduce cell phone use to only the most necessary calls, and when you do use it, keep your calls short and to the point. Research has shown that a short, two-minute call can alter the natural electrical activity of the brain up to one hour.

2. Text when you can. Obviously you don't want to do this when you're driving or while performing any other activity that demands your full attention, but when a text will suffice, send one instead of dialing.

3. Consider replacing your current phone with a low-radiation phone. Whenever you make or receive a call, your phone signal travels via electromagnetic waves, and scientists don't yet know - fully - how much they will affect your health over a period of time. So for now, researchers are suggesting you replace your current model with a lower-emission phone. Consult the Environmental Working Group's recommendations here: http://www.ewg.org/cellphoneradiation/Get-a-Safer-Phone

4. Use a headset or speaker. Right now, there isn't enough research to determine whether using a speaker or headset, rather than your phone itself, offers better protection. But one thing is known: the electromagnetic waves emitted by your phone are absorbed most often received by the temporal lobe of your brain, during normal usage (phone to your ear), and that part of your brain handles hearing, auditory processing, formation of long-term memory, speech, and vision.

5. Don't put the phone by your body or on your waist during use. Again, it's a device that emits and transmits electromagnetic waves that are absorbed by the soft tissues in your body. One study suggested that men who wear their cell phones near their waste could see their sperm count reduced by as much as one-third.

6. Delayed use. If you're using your phone without a headset, wait for your call to connect before putting it next to your ear.

7. Avoid use in metal boxes. That may sound funny but using your phone in, say, an elevator or your car, cuts signal strength and forces the phone to use more power to connect.

8. About that power thing... If your cell signal is down to a few bars, consider waiting to use your phone. Again, it's a power thing: less signal means more power is required for use.

9. A word about EMFs. Protect yourself from EMFs - electromagnetic fields. You can do that by purchasing a scientifically validated EMF protection device. Doing so will strengthen your bioenergy field and immune system against the harmful effects of EMFs.

10. As always, support your body with proper nutrition. Think about supplementing your nutritional diet with anti-oxidants such as catalase, glutathione, and Coq10. You can also supplement with melatonin, Zinc and Gingo Biloba.

When mulling these suggestions, keep this in mind: "The voluntary exposure of the brain to microwaves from hand-held mobile phones... [is] the largest human biological experiment ever," says Leif Salford, Head of Research at Lund University, Sweden.