Kerry uses fake photo to push for war in Syria...

Oh, so we killed all the people in the photo... 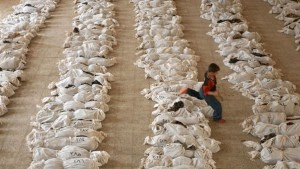 Secretary of State John Kerry opened his speech Friday by describing the horrors victims of the chemical weapon attack suffered, including twitching, spasms and difficulty breathing.

Attempting to drive the point home, Kerry referenced a photograph used by the BBC illustrating a child jumping over hundreds of dead bodies covered in white shrouds. The photo was meant to depict victims who allegedly succumbed to the effects of chemical weapons via Assad’s regime.

However, it was later exposed the photograph used had been taken in 2003 in Iraq. It was not related to Syrian deaths whatsoever and was later retracted.