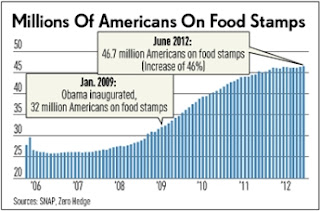 While the administration laments the distraction of "phony" scandals like Benghazi and Fast and Furious that leave real Americans dead, it trots out phony statistics about how well the economy is doing.

"And what is absolutely true is that we have come a long way since the depths of the Great Recession," White House Press Secretary Jay Carney said at a recent press briefing. "We've created over 7.2 million private-sector jobs." How many of those jobs are part-time is one of the many things Carney left out.

At the end of January 2009, 32.2 million Americans received Supplemental Nutrition Assistance Program (SNAP) aid. As of April 2013, there were 47.5 million Americans on food stamps. Using the White House's job growth number, the 15 million increase in recipients means more than two people went on food stamps for each job the administration says it has created.

That's not the only statistic Carney won't recite.

Food stamps feed not only Americans, but also the world. As the New York Post reports, welfare recipients buy groceries with Electronic Benefit Transfer cards and pack them in giant barrels to send to relatives overseas. The U.S. spent $522.7 million on foreign aid to the Caribbean last fiscal year, government data show, but the figure does not include what New Yorkers alone pay using taxpayer-funded benefits to ship food to relatives in Jamaica, Haiti and the Dominican Republic.

The practice is so common, hundreds of 45- to 55-gallon containers line the walls of some supermarkets, ready to be packed with taxpayer-funded goodies.

Perhaps to spare the cost of sending food overseas, the administration is using food stamps to attract more to come here, even as the immigration debate rages. A flier given to the Mexican Embassy by the USDA highlights that "you need not divulge information regarding your immigration status in seeking this benefit for your children."

"USDA and the government of Mexico have entered into a partnership to help educate eligible Mexican nationals living in the United States about available nutrition assistance," the USDA explains in a brief paragraph on its "Reaching Low-Income Hispanics With Nutrition Assistance" Web page. "Mexico will help disseminate this information through its embassy and network of approximately 50 consular offices."

As CNSnews reports, the Agriculture Department estimates that 101 million people take part in at least one of the 15 food programs offered by the agency, at a cost of $114 billion in fiscal 2012.

That compares with America's 97.2 million full-time private-sector workers in 2012.