Lt. Col. Robert Anderson, said: “I am convinced Mohamed was “sponsored” by a U.S. intelligence service I assumed the CIA.” 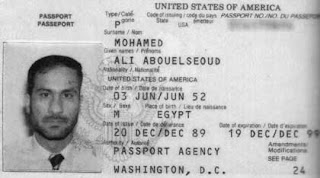 The following announcement came straight from Georgia’s Ministry of Defence:

The final phase of the Basic Mountain Training Summer Course is underway in the Sachkhere Mountain Training School under the NATO’s Partnership for Peace (PFP) program. 18 military servicemen of the Ukraine, Jordan and Egypt are invited to course.

Successful graduates will be awarded with the relevant certificates after completion of the training. After graduating Basic Mountain Training Summer Course foreign partners will have opportunity to attend further stage of summer and winter courses in Sachkhere Mountain Training School.

I know those of you who have been following our Operation Gladio Plan B coverage get the significance of this announcement right away. However, let me present a case, a real-life example, for those of you who are new to our site and coverage:

Let’s remember Ali Mohamed- A very special inmate who is currently being held in the secret section of a US federal prison. He was a top commando in charge of training Al Qaeda and Osama bin Laden’s bodyguard. He was Bin Laden’s and Ayman al-Zawahiri’s top spy inside the U.S. government.

Here are some highlights of Ali Mohamed’s resume:

Major in the Egyptian Army Special Forces, then Sergeant in the U.S. Army Special Forces at Fort Bragg, long-time al-Qaida operative and trainer of terrorists who bombed the New York World Trade Center, chief of security for Osama bin Laden, CIA agent, FBI informant, and applicant for a Department of Defense security clearance.

Ali Abdelseoud Mohamed was born in Egypt in 1952. He received a bachelor’s degree in psychology from the University of Alexandria. In testimony after his arrest in 1998, he claimed to have two bachelor’s degrees and a master’s degree – one of them perhaps from his two years of training at the Egyptian military academy. He joined the Egyptian Army in 1970 or 1971 and rose to the rank of Major in the Special Forces.1

In 1981, the Egyptian Army sent Mohamed to Fort Bragg for 4 months’ training with the U.S. Special Forces. Working alongside Green Berets, he learned unconventional warfare, counterinsurgency operations, and how to command elite soldiers on difficult missions.

You see our majority is under this notion that Al Qaeda operatives are some Afghani version of our hillbillies: a bunch of primitive illiterate tribesmen clad in gauze shalwar, sporting a few feet-long beards, spitting out phlegm while marching around with pitchforks fighting the western windmills. Well, they are wrong. One look at Ali Mohamed’s qualifications and you’d have no doubt:

A highly skilled linguist who spoke fluent English, French, and Hebrew in addition to his native Arabic

A major in the Egyptian army’s military intelligence unit

A citizen of United States married to an American woman from Santa Clara, California

A Drill Sergeant at Fort Bragg

A teacher at the John F. Kennedy Special Warfare Center and School

This is what Ali Mohamed’s commanding officer, Lt. Col. Robert Anderson, said: “I am convinced Mohamed was “sponsored” by a U.S. intelligence service I assumed the CIA.”

And, he was right.

If you haven’t already, watch our video interview series on Operation Gladio-Plan B:

Because if you read up on Mohamed and watch our Gladio series you’ll know and understand the significance of Georgia as the new NATO-CIA training center for Arab & North African military elites. As we speak they are training the next commandos for the next wave of terror attacks to be carried out by the next big terror cell(s)-whether under the old label aka Al-Qaeda or a brand new title equally glitzy and ferocious.

Link to article and videos:
http://www.lewrockwell.com/2013/07/sibel-edmonds/the-new-cia-nato-arab-terrorist-training-center%E2%80%A8/
Posted by Wallyworld