Here's a murder you haven't heard about in the mainstream media. I wonder why???

Shouldn't this case be causing outrage nation-wide as well? There appears to be a double standard by liberals and the media when the race in these types of crimes is reversed. What would the media's reaction have been if Chellew had shot one of his attackers? I've stayed away from the Zimmerman story for the most part but this incident clearly demonstrates hypocrisy at its' worst...

On July 1st a group of black gang members brutally attacked and beat a random white pedestrian in Cobb County, Georgia. He was then knocked onto the road where he was hit by oncoming traffic.

This story received minor coverage in the local news. If the races had been reversed this would be the biggest news story in the United States. It would have knocked the Zimmerman trial out of the news.

Four south Cobb teenagers are in custody in connection with the beating death of a 36-year-old Mableton man on Mableton Parkway early Sunday morning.

The incident initially was reported by police as a hit-and-run death over the weekend, but the narrative changed drastically Tuesday after the arrests of four teenagers on murder charges.

Jekari Oshay Strozier, 19; Antonio Shantwan Pass, 18; and Johnathan Donald Anthony, 18; all from Mableton, are in the Cobb County jail without bonds on charges of felony murder, aggravated assault and violation of the Georgia Street Gang Act. 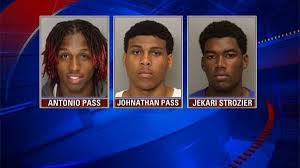 The fourth suspect, 18-year-old Kemonta Bonds of Mableton, turned himself in to police Tuesday afternoon.

They have been accused in the beating death of Joshua Heath Chellew, 36, of Mableton and all but Bonds were arrested Monday afternoon by Cobb County investigators.

According to the warrant, the four teenagers are accused of starting a fight with Chellew at a Chevron gas station in the 6200 block of Mableton Parkway near Community Drive at about 1:20 a.m. Sunday. They repeatedly punched and kicked him, according to police.

While attempting to escape, Chellew backed into the center five-lane highway and was pushed to the ground and knocked unconscious, the warrant states.

They then walked away from Chellew, “leaving him helpless,” and he was eventually hit by a car, the warrant states.

In the past, this website has documented The Atlanta Journal-Constitution’s [AJC] history of censoring crime when the perpetrators are black and the victims are white.

When “Atlanta lunch hour shooter” Nkosi Thandiwe went on a racially motivated shooting spree, the AJC intentionally censored major aspects of the story. All of his victim’s were young, attractive white females. It took the AJC a year and a half to finally admit that the spree shooting was racially motivated. WSBTV Channel 2 Atlanta had already admitted the shooting were racially motivated about six months earlier. It wasn’t until Thandiwe stated that he was driven by a hatred white people in court, that the AJC decided that they wouldn’t be able to continue censoring the story.

Now the AJC is condemning websites, such as this one, that are bringing attention to the gruesome murder of Joshua Heath Chellew. The AJC boldly declared that the murder of a 36 year old white man by four black 18 and 19 year old black males in no way involved racial animosity. Apparently AJC crime reporter Christian Boone can read minds.

The AJC says Joshua Heath Chellew instigated a “fight” with the suspects. They claim the 36 year old white man identified himself to the suspects as a member of an all black street gang called the “Crips.” Some of the suspects are known members of a rival gang called “Re-up.” The AJC cites Cobb Police Sgt. Dana Pierce as their source. The AJC wrote “the fight between Chellew and his four assailants apparently started over gang identification.” The AJC is clearly trying to depict Chellew as an aggressor who brought a four man mob attack on himself. The make it sound like Chellew wanted to fight four people, who are all half his age, at once.

The AJC then downplays the circumstances of his death. They make it sound like Chellew’s death was an accident. They claimed Chellew “stumbled” in front of a car after the attack. In reality Chellew was pummeled, then chased into the street, then pummeled some more until he was unconscious and laying in the the middle of the road. Then left lying on the road as incoming traffic was approaching.

While attempting to escape, Chellew backed into the center five-lane highway and was pushed to the ground and knocked unconscious, the warrant states. They then walked away from Chellew, “leaving him helpless,” and he was eventually hit by a car, the warrant states. – Marietta Daily Journal, July 3rd, 2013

Wow, those are two very different accounts. So according to the AJC, Chellew picked a fight with four black half his age. He was then accidentally killed, and the incident has absolutely has no racial component whatsoever.

The staff of this website finds the account depicted by the AJC to be very implausible. We also believe that if the races were reversed, the same AJC would be screaming “Racially Motivated Murder” on the front page. Above all, we believe the AJC would never, ever publish an article downplaying a white on black murder.

The AJC also completely ignores the most fundamental issue. Why has this murder gotten so little coverage in the “mainstream” media?