The terrorists have won...

Did the Military and Police Go Too Far in Locking Down Boston and Conducting Involuntary Door-to-Door Searches? 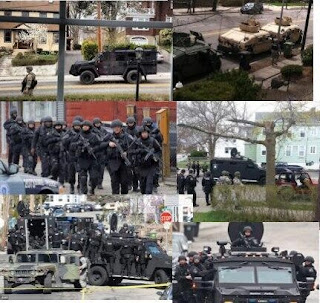 The above are real pictures of military and police locking down Boston and searching door-to-door for the Boston bomber in Watertown, Massachusetts.

And here’s a video of the involuntary searches and evacuations:

Senator Rand Paul and other congressmen subsequently said they would have approved of armed drones going in as well to help take out the suspect.

We have no idea yet whether or not the suspect is in fact guilty of terrorism in Boston. But it is important to remember – as Glenn Greenwald points out – the FBI has been “positive” about the guilt of numerous people who were totally innocent:

As so many cases have proven – from accused (but exonerated) anthrax attacker Stephen Hatfill to accused (but exonerated) Atlanta Olympic bomber Richard Jewell todozens if not hundreds of Guantanamo detainees accused of being the “worst of the worst” but who were guilty of nothing – people who appear to be guilty based on government accusations and trials-by-media are often completely innocent. Media-presented evidence is no substitute for due process and an adversarial trial.

The FBI also said it was positive that Bruce Ivins was the anthrax killer (after falsely accusing 2 other people of being the culprits). However, the National Academy of Science found that the FBI failed to prove its case.

Of course, it turns out that the bombing suspect didn’t have a single weapon when all of the troops were sent in and police shot hundreds of rounds at him. He also never robbed a 7-11, as was claimed at first.

Indeed, the high-tech manhunt for Dzhokhar Tsarnaev has reminded a lot of people of Running Man … the distopian Arnold Schwarzenegger movie where – after Schwarzenegger is framed – high-tech assassins are sent out to get him.

Again, we are not saying that Tsarnaev is innocent. We have no idea of his innocence or guilt.

But sending in overwhelming military and police force to get one 19-year old under ever-shifting explanations makes me a little nervous.

Many Americans assume that this was just a one-time emergency. After all, a terrorist who had allegedly killed and wounded many innocents was on the run … and had supposedly thrown more pressure cooker bombs at police.

Many other Americans are saying that this was a very overt foreshadowing of martial law … of which many top government officials have warned.

But there are many other negative consequences which stem from over-reactions to terror. For example – after 9/11 – many Americans were so scared that they supported a war in Iraq that will actually backfire and increase terrorism. Indeed, if the Boston suspect did it, it was likely because we invaded Iraq and have launched wars throughout the Middle East.

And the Iraq war was so expensive (as much as $5 to 6 trillion dollars) that it helped make us broke … which further weakens national security.

As Andrew Napolitano writes in the conservative publication Reason … which was heartily supported by liberal site Reddit:

The American people made a pact with the devil in the weeks and months following 9/11 when they bought the Bush-era argument that by surrendering liberty they could buy safety. But that type of pact has never enhanced either liberty or safety, and its fruits are always bitter.

The pact with the devil occurred in the fall of 2001, when then President George W. Bush and Congress decided that they would use the machinery of the federal government to secure safety, rather than liberty. So, the Bush-inspired Patriot Act permits federal agents to write their own search warrants, and the Bush-inspired new FISA statutes permit search warrants of some Americans’ phone calls without a showing of probable cause as the Constitution requires, and the Bush-era intimidation of telephone service providers permitted our overseas spies to snoop on our domestic phone calls. None of this has enhanced safety, and all of it has diminished liberty.

In the Obama administration, the devil has demanded more. In the past five years, we have seen federal spies capturing the keystrokes on our computers, local police using federal dollars to install cameras and microphones on nearly every street corner, and, the latest lamentable phenomenon, the use of false emergencies to undermine freedom.

Think about this: The governor of Massachusetts, the superintendent of the Massachusetts State Police, the mayor of Boston, the Boston police commissioner, and the head of the Boston FBI office all proclaimed on Saturday morning that the danger had passed and Boston and its suburbs could return to normal. Yet the attorney general in Washington told his FBI agents in Boston to disregard those officials and instead pretend that the public safety was still jeopardized and then expand a 10-second window to 72 hours.

In addition, disproportionate fear can be a corrosive force in our lives. Fear makes us unable to think straight. As we noted in 2008, in a piece called Get a Grip, America:

Former deputy national intelligence officer for transnational threats, a 23-year senior CIA analyst, who “drafted or was involved in many of the government’s most senior assessments of the threats facing our country [and who] devoted years to understanding and combating the jihadist threat”, writes today in the Washington Post that the neocons have whipped us into an irrational fear of the terrorism. In reality, “Osama bin Laden and his disciples are small men and secondary threats whose shadows are made large by our fears” and our leaders.

This is no surprise to anyone who has been paying attention. The BBC produced a documentary called The Power of Nightmares in 2005 that showed that politicians were greatly exaggerating the terrorist threat for political ends.

Because so many Americans got their panties in a wad about the boogeyman, we have allowed our basic rights and liberties to be taken away, allowed the executive branch to seize dictatorial powers and ignore Congress and the courts, allowed an illegal war be launched which has destroyed our economy … and has actually crippled our real national security (torture and imperial wars create real terrorists and push away our allies).

Of course, Obama – like Bush – claims that tyrannical measures are necessary to fight the war on terror. But FBI agents and CIA intelligence officials, constitutional law expert professor Jonathan Turley, Time Magazine, Keith Olbermann and the Washington Post have all said that U.S. government officials “were trying to create an atmosphere of fear in which the American people would give them more power”, and even former Secretary of Homeland Security – Tom Ridge – admits that he was pressured to raise terror alerts for political purposes … to help Bush win reelection.

In fact, fear of terror makes people stupid … people are actually much more likely to be killed by much more boring and mundane causes than terrorism.

The war is in our minds, between being scared of our shadows and keeping the true threat in perspective.

Fear is a powerful weapon — and there’s no reason the American president should act as a force multiplier for Al Qaeda.

And as professor Scott Atran notes:

To terrorize and destabilize, terrorists need publicity and our complicity. With publicity, even failed terrorist acts succeed in terrorizing; without publicity, terrorism would fade away … By amplifying and connecting relatively sporadic terrorist acts into a generalized “war,” the somewhat marginal phenomenon of terrorism has become a primary preoccupation of our government and people.

Our founding fathers advised us not to panic:

Those who would trade safety for freedom deserve neither.
– Thomas Jefferson

They who can give up essential liberty to obtain a little temporary safety, deserve neither liberty nor safety.
- Benjamin Franklin

And Christians and Jews should remember that the Bible teaches us to be brave … and not to panic.