Do you wonder why the government is pushing food stamps on people??? 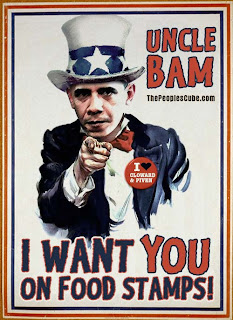 by: Ethan A. Huff, staff writer

The same corporation that received tens of billions of taxpayer dollars back in 2008 as part of the massive corporate bailout swindle is now reaping hundreds of millions of dollars every year from the federal food stamp program, according to little-known reports. For every American that signs up for the Supplemental Nutrition Assistance Program (SNAP) in 23 states, it turns out, JPMorgan Chase & Co. earns a processing fee of between 31 cents and $2.30 per month, which adds up to nearly $1 billion a year in additional revenues for the company.

Much of the younger generation might not realize it, but the federal food stamp program used to be just that -- a system serviced by actual paper food stamps. Today, however, the system is run by an electronic card system known as Electronic Benefits Transfer (EBT), for which plastic cards are issued to recipients. These cards work much like credit or debit cards, and can easily be swiped discreetly at grocery and convenience stores for food purchases. And rather than have to be continually reissued like stamps, EBT cards are simply recharged every month with more money.

But with this advanced technology comes the need for residual processing, and this is where JPMorgan comes into the picture. According to MoneyMorning.com, 23 states currently contract out with JPMorgan to handle the processing responsibilities associated with EBT management. And for each person receiving food stamp benefits, JPMorgan is able to add a monthly sum to its revenue stream which, when compiled across the board, appears to add up to nearly $1 billion annually.

Based on the latest available figures, JPMorgan appears to have raked in roughly $100 million in revenues, on average, from each of the states with which it contracts throughout the past seven years. This adds up to at least $2.3 billion in total revenues during this same time period, although the precise figure cannot be confirmed. Even so, JPMorgan is clearly garnering a pretty penny off the backs of both taxpayers and the nation's poorest individuals through its EBT contracts.

"This business is a very important business to JPMorgan," said Christopher Paton, the Managing Director of JPMorgan's public-sector payments business, to Bloomberg News back in 2010 about its federal food stamp revenue stream. "It's an important business in terms of its size and scale ... Right now, volumes have gone through the roof in the past couple of years."

JPMorgan also collects fees directly from food stamp recipients
EBT processing fees are not the only source of food stamp revenue for JPMorgan, however. According to MoneyMorning.com, the corporate giant also charges individual states a monthly point-of-sale (POS) machine fee, and SNAP recipients who use their EBT cards at ATMs outside of the JPMorgan network are also charged additional user fees. JPMorgan also charges EPT users fees to replace lost cards, and even charges a 25-cent fee for customer service calls.

"All those charges and fees come directly out of the pocket[s] of SNAP recipients -- people so poor they need food stamps to make ends meet," writes David Zeiler, Associate Editor of MoneyMorning.com. "You'd think a bank that needed a $94.7 billion bailout from U.S. taxpayers as a result of the 2008 financial crisis would have a better sense of civic responsibility. But that's just not in JPMorgan's DNA."

In Florida, a food-stamp recruiter deals with wrenching choices

A good recruiter needs to be liked, so Dillie Nerios filled gift bags with dog toys for the dog people and cat food for the cat people. She packed crates of cookies, croissants, vegetables and fresh fruit. She curled her hair and painted her nails fluorescent pink. “A happy, it’s-all-good look,” she said, checking her reflection in the rearview mirror. Then she drove along the Florida coast to sign people up for food stamps.

Her destination on a recent morning was a 55-and-over community in central Florida, where single-wide trailers surround a parched golf course. On the drive, Nerios, 56, reviewed techniques she had learned for connecting with some of Florida’s most desperate senior citizens during two years on the job. Touch a shoulder. Hold eye contact. Listen for as long as it takes. “Some seniors haven’t had anyone to talk to in some time,” one of the state-issued training manuals reads. “Make each person feel like the only one who matters.”

In fact, it is Nerios’s job to enroll at least 150 seniors for food stamps each month, a quota she usually exceeds. Alleviate hunger, lessen poverty: These are the primary goals of her work. But the job also has a second and more controversial purpose for cash-strapped Florida, where increasing food-stamp enrollment has become a means of economic growth, bringing almost $6 billion each year into the state. The money helps to sustain communities, grocery stores and food producers. It also adds to rising federal entitlement spending and the U.S. debt.

Nerios prefers to think of her job in more simple terms: “Help is available,” she tells hundreds of seniors each week. “You deserve it. So, yes or no?”

In Florida and everywhere else, the answer in 2013 is almost always yes. A record 47 million Americans now rely on the Supplemental Nutrition Assistance Program (SNAP), also known as food stamps, available for people with annual incomes below about $15,000. The program grew during the economic collapse because 10 million more Americans dropped into poverty. It has continued to expand four years into the recovery because state governments and their partner organizations have become active promoters, creating official “SNAP outreach plans” and hiring hundreds of recruiters like Nerios.

A decade ago, only about half of eligible Americans chose to sign up for food stamps. Now that number is 75 percent.

On the Treasure Coast of Florida, the official outreach plan is mostly just Nerios, who works for a local food bank that is funded in part by the state. She roams four counties of sandbars and barrier islands in her Ford Escape, with an audio Bible in the CD player and a windshield sticker that reads “Faith, Hope and Love.” She distributes hundreds of fliers each week, giving out her personal cellphone number and helping seniors submit SNAP applications on her laptop.

On this particular morning, Nerios pulled into the Spanish Lakes retirement community near Port St. Lucie, Fla., and set up a display table in front of the senior center. She advertised her visit weeks in advance, but she can never predict how many people will come. Some events draw hundreds; others only a dozen. Her hope was to attract a crowd with giveaways of pet toys and hundreds of pounds of food, which she stacked high on the table. “What person in need doesn’t want food that’s immediate and free?” she said.

She watched as a few golf carts and motorized scooters drove toward her on a road lined with palm trees, passing Spanish Lakes signs that read “We Love Living Here!” and “Great Lifestyle!” The first seniors grabbed giveaway boxes and went home to tell their friends, who told more friends, until a line of 40 people had formed at Nerios’s table.

A husband and wife, just done with nine holes of golf, clubs still on their cart.

An 84-year-old woman on her bicycle, teetering away with one hand on the handlebars and a case of applesauce under her other arm.

A Korean War veteran on oxygen who mostly wanted to talk, so Nerios listened: 32 years in the military, a sergeant major, Germany, Iron Curtain, medals and awards. “A hell of a life,” the veteran said. “So if I signed up, what would I tell my wife?”

“Tell her you’re an American and this is your benefit,” Nerios said, pulling him away from the crowd, so he could write the 26th name of the day on her SNAP sign-up sheet.

She distributed food and SNAP brochures for three hours. “Take what you need,” she said, again and again, until the fruit started to sweat and the vegetables wilted in the late-morning heat. Just as she prepared to leave, a car pulled into the senior center and a man with a gray mustache and a tattered T-shirt opened the driver-side door. He had seen the giveaway boxes earlier in the morning but waited to return until the crowd thinned. He had just moved to Spanish Lakes. He had never taken giveaways. He looked at the boxes but stayed near his car.

“Sir, can I help?” Nerios asked. She brought over some food. She gave him her business card and a few brochures about SNAP.

“I don’t want to be another person depending on the government,” he said.

“How about being another person getting the help you deserve?” she said.

As CNSNews.com previously reported, food stamp rolls in America recently surpassed the population of Spain. A record number 47,692,896 Americans are now enrolled in the program and the cost of food stamp fraud has more than doubled in just three years.
Link:
http://cnsnews.com/blog/joe-schoffstall/record-number-households-food-stamps-1-out-every-5