Interesting visitor to White House gets visit from First Lady in hospital...

Visited by First Lady Michelle Obama while in hospital

Saudi national Abdul Rahman Ali al-Harbi, who was briefly held as a “person of interest” in the Boston bombings and then downgraded in less than 24 hours to a witness, visited the White House on numerous occasions since 2009, The Rightscoop reports today.

The startling allegation follows an earlier report indicating that al-Harbi was visited in the hospital by First Lady Michelle Obama after he allegedly sustained injuries from one of the explosives placed at the Boston Marathon.

Blogosphere sleuths subsequently put their hands on a photo definitively placing Obama at the hospital.

The Department of Homeland Security confessed today that al-Harbi was on a terror watch list, although DHS boss Napolitano attempted to minimize this revelation by stating that he was just in the wrong place at the wrong time.

“Because he was being interviewed, [after the he was at that point put on a watchlist, and then when it was quickly determined he had nothing to do with the bombing, the watch listing status was removed,” she told Republican Sen. Chuck Grassley of Iowa during a hearing of the Senate Judiciary Committee.

“Napolitano seems to either flatly contradict herself or openly admit that it is easy for someone to be put on a terrorist watchlist even though they don’t reach ‘person of interest’ status,” Walid Shoebat writes on his blog today. “That’s either a lie or a chilling statement of what this government is doing.”

A couple obvious questions come to mind. First, why did the First Lady visit a man who was on a terror watch list, no matter how briefly, and second, how is it that he gained access to what is supposedly one of the most secure buildings in the United States?

Is it possible we can attribute the hospital visit and multiple visits to the White House to a special relationship shared between Saudi royals and at least two presidents? For instance, is well-known that George W. Bush had a close relationship with the corrupt Saudi monarchy.

It is important to note that it was the Department of Homeland Security that initially labeled al-Harbi as a suspected terrorist and the alternative media is merely following up on this fact.

Government released and micromanaged evidence in the Boston bombing case implicates the Tsarnaev brothers as the culprits and not Abdul Rahman Ali al-Harbi. His presence at the scene, while suspicious, does not implicit him in this crime.

Are These Pictures Of Michelle Obama Visiting The Saudi Student Put On A Watchlist Last Week?

Photos of a visit Michelle Obama is alleged to have had with Abdul Rahman Alharbi — the Saudi national previously considered to be “person of interest,” “armed and dangerous,” and worthy of inclusion on a watch list — may have appeared on a Facebook page associated with an English language school in Boston or students who share a common bond of going to English schools in the area. 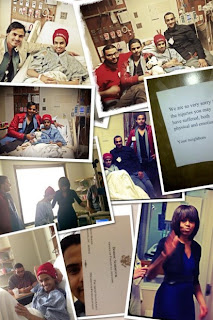 The above photo montage, which was posted at FreeRepublic today, originally appears on the Facebook page for “EC Boston Saudi’s.” EC Boston most likely refers to the EC Boston English Language School. The Arabic caption on the photo reads: “اخونا عبدالرحمن الحربي مع ميشيل أُباما واصاحبة”

Filtered through Google Translate, this comes out to: “Brother Abdul Rahman Alharbi with Michelle [untranslatable] and Asahabh.” The photos were originally posted by Facebook user Yazeed Salem, who appears to be pictured with Alharbi in the top-left photo.

The individual photographs give every appearance of being genuine. There is no obvious sign of Photoshopping (although it’s possible they have been)...