"If you had told someone in 1996 the security measures, laws, and police agencies that would exist in 2013, they would have laughed you out of the room. Every crisis, whether government created or just convenient to their agenda, has been utilized by the oligarchs to expand the police state and benefit the crony capitalists that profit from its expansion." 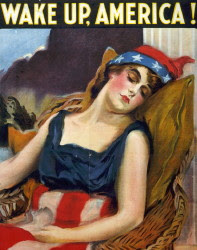 The most disgraceful example of abnormality that has infected our culture has been the cowardice and docile acquiescence of the citizenry in allowing an ever expanding police state to shred the U.S. Constitution, strip us of our freedoms, and restrict our liberties. Our keepers have not let any crisis go to waste in the last seventeen years. They have also taken advantage of the willful ignorance, childish immaturity, extreme gullibility, historical cluelessness, financial illiteracy and techno-narcissism of the populace to reverse practical legislation and prey upon irrational fears to strip the people of their constitutionally guaranteed liberties and freedoms. If you had told someone in 1996 the security measures, laws, and police agencies that would exist in 2013, they would have laughed you out of the room. Every crisis, whether government created or just convenient to their agenda, has been utilized by the oligarchs to expand the police state and benefit the crony capitalists that profit from its expansion. The character of the American people has been found wanting as they obediently cower and beg for protection from unseen evil doers. The propagandist corporate media reinforces their fears and instructs them to submissively tremble and implore the government to do more. The cosmic obliviousness and limitless sense of complacency of the general population with regards to a blatantly obvious coup by a small cadre of sociopathic financial elite and their army of bureaucrats, lackeys and jackboots is a wonder to behold.

The 1929 stock market crash and ensuing Great Depression was primarily the result of excessively loose Federal Reserve monetary policy during the Roaring 20’s and the unrestrained fraud perpetrated by the Wall Street banks. The 1933 Glass-Steagall Act was a practical 38 page law which kept Wall Street from ravenously raping its customers and the American people for almost seven decades. The Wall Street elite and their bought off political hacks in both parties repealed this law in 1999, while simultaneously squashing any effort to regulate the financial derivatives market. The day trading American public didn’t even look up from their computer screens. Over the next nine years Wall Street went on a fraudulent feeding frenzy rampage which brought the country to its knees and then held the American taxpayer at gunpoint to bail them out. The Federal Reserve arranged rescue of LTCM in 1998 gave the all clear to Wall Street that any risk was acceptable, since the Fed would always bail them out. Just as they did in the 1920’s, the Federal Reserve set the table for financial disaster with excessively low interest rates and non-existent regulatory oversight.

The downward spiral of our empire towards an Orwellian/Huxley merged dystopian nightmare accelerated after the 9/11 attacks. Within one month those looking to exert hegemony over all domestic malcontents had passed the 366 page, 58,000 words Patriot Act. Did the terrified masses ask how such a comprehensive destruction of our liberties could be written in under one month? It is apparent to anyone with critical thinking skills that the enemy within had this bill written, waiting for the ideal opportunity to implement this unprecedented expansion of federal police power. Electronic surveillance of our emails, phone calls and voice mails, along with warrantless wiretaps, and general loss of civil liberties was passed without question under the guise of protecting us. Next was the invasion of a foreign country based upon lies, propaganda and misinformation without a declaration of war, as required by the Constitution. Our government began torturing suspects in secret foreign prisons. The shallow, self-centered, narcissistic, Facebook fanatic populace has barely looked up from texting on their iPhones to notice that we have been at war in the Middle East for eleven years, because it hasn’t interfered with their weekly viewing of Honey Boo Boo, Dancing With the Stars, or Jersey Shore. They occasionally leave their homes to wave a flag and chant “USA, USA, USA”, as directed by the media, when a terrorist like Bin Laden or Boston bomber is offed by our security services, but for the most part they can live their superficial vacuous lives of triviality unscathed by war.

The creation of the Orwellian Department of Homeland Security ushered in a further encroachment of our everyday freedoms. They attempted to keep the masses frightened through a ridiculous color coded fear index. Little old ladies, people in wheelchairs and little children are subject to molestation by lowlife TSA perverts. Military units conduct “training exercises” in cities across the country to desensitize the sheep-like masses, who fail to acknowledge that the U.S. military cannot constitutionally be used domestically. DHS considers military veterans, Ron Paul supporters, and Christians as potential enemies of the state. The use of predator drones to murder suspected adversaries in foreign countries, while killing innocent men, women and children (also known as collateral damage), has just been a prelude to the domestic surveillance and eventually extermination of dissidents and nonconformists here in the U.S. We are already becoming a 1984 CCTV controlled nation. DHS has been rapidly militarizing local police forces in cities and towns to supplement their jackbooted thugs. Obama’s executive orders have given him the ability to take control of industry. He can imprison citizens without charges for as long as he deems necessary. Attempts to control gun ownership and shutdown the internet is a prologue to further government domination and supremacy over our lives when the wheels come off this unsustainable bus.

The last week has provided a multitude of revelations about our government and the people of this country. The billions “invested” in our police state, along with warnings from a foreign government, and suspicious travel patterns were not enough for our beloved protectors to stop the Boston Marathon bombing. After stumbling upon these amateur terrorists by accident, the 2nd responders, with their Iraq war level firepower, managed to slaughter one of the perpetrators, but somehow allowed a wounded teenager to escape on foot and elude 10,000 donut eaters for almost 24 hours. The horde of heavily armed, testosterone fueled thugs proceeded to bully and intimidate the citizens of Watertown by illegal searches of homes and treating innocent people like criminals. The government completely shut down the 10th largest metropolitan area in the country for an entire day looking for a wounded 19 year old. The people of Boston obeyed their zoo keepers and obediently cowered in their cages.

The entire episode was an epic fail. The gang that couldn’t shoot straight needed an old man to find the bomber in his backyard boat. The people of Boston exhibited the passivity and subservience demanded by their government. Since the capture of the remaining terrorist, the shallow exhibitions of national pride at athletic events and smarmy displays of honoring the police state apparatchiks who screwed up – allowing the attack to occur and looking like the keystone cops during the pursuit of the suspects, has revealed a fatal defect in our civil character. We are living in a profoundly abnormal society, with millions of medicated mindless zombies controlled by a vast propaganda machine, who seemingly enjoy having their liberties taken away. Most have willingly learned to love their servitude. For those who haven’t learned, the boot of our vast security state will just stomp on their face forever. We’re realizing the worst dystopian nightmares of Orwell and Huxley simultaneously. This abnormalcy bias will dissipate over the next ten to fifteen years in torrent of financial collapse, war, bloodshed, and retribution. Sticking your head in the sand will not make reality go away. The existing social, political, and financial order will be swept away. What it is replaced by is up to us. Will this be the final chapter or new chapter in the history of this nation? The choice is ours.

“If you want a vision of the future, imagine a boot stamping on a human face – forever.
- George Orwell