Yep, there is only one political party, folks... 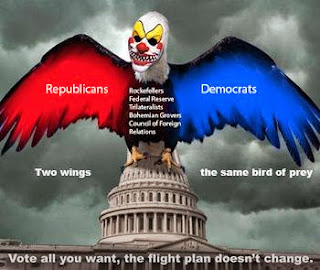 Since leaving the State Department last year, Hillary Rodham Clinton has racked up scores of accolades and appeared on many a big stage. Still, it might come as a surprise that a past Republican presidential nominee -- specifically, the one who is among the loudest critics of Clinton's handling of the Benghazi terrorist attacks -- would invite her to his desert retreat for a lofty conversation about leadership values.

This is precisely what Sen. John McCain (R-Ariz.) has done.

Clinton, a prospective 2016 Democratic presidential candidate, will appear on stage Saturday with McCain at the Sedona Forum, an annual ideas festival hosted by the McCain Institute for International Leadership at Arizona State University. Clinton is among the national and international business leaders, philanthropists and public figures appearing at the gathering, held in Sedona, the tony red-rocks oasis in Arizona's Verde Valley.

In a statement released Thursday, McCain called Clinton "my friend" and praised her public service career.

"From her years of service as first lady, in the U.S. Senate and the State Department, one would be hard-pressed to find a leader with Secretary Clinton's informed perspective on the many challenges facing America across the globe," McCain said.

According to a news release, Clinton is scheduled to "participate in a conversation" with McCain. This year's forum will focus on "Crisis in the Middle East: Values, Strategy and Options," and will include a session on Russia and Ukraine and on combating human trafficking...

Read more if you can stand it:
http://www.washingtonpost.com/blogs/post-politics/wp/2014/04/24/john-mccain-to-host-hillary-clinton-in-sedona-ariz/