Here's McCain with their leader... 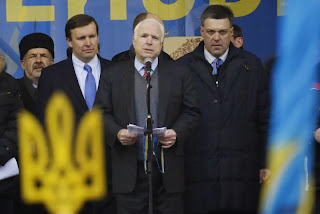 There are No Neo-Nazis in Ukraine. And the Obama Administration does not support Fascists

"We are putting our hopes in a new generation of politicians"

Svoboda is a Neo-Nazi Party, Ukraine’s fourth biggest party holding 36 seats out of 450 in parliament.

They’re also part of the Alliance of European National Movements along with the BNP and Jobbik.

Svoboda is supported directly by Washington.

This is Svoboda, the Neo-Nazi group that is doing the fighting in Ukraine.

Update February 24. The BBC headlines read: “We are putting our hopes in a new generation of politicians” amidst unconfirmed reports that an arrest warrant has been issued for the democratically elected president.

Speaker of the Parliament Oleksandr Turchynov who allegedly issued the arrest warrant directed against President Viktor Yanukovych stated “We must move towards a national government by Tuesday”. That government, were it to be formed, would be integrated by Svoboda.

Scroll down to meet the “new generation of politicians” supported and financed by the Obama administration...