We coome in peace...

Where have we heard this before? 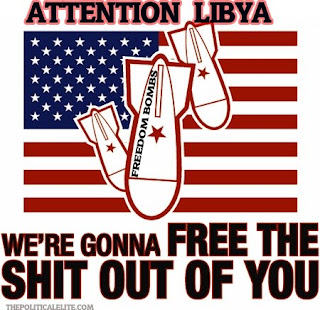 An effort to impose the sort of “humanitarian aid” on Syria that ultimately killed around 30,000 people in Libya is underway in Tunisia.

CNN reports that “world powers” – corrupt states belonging to the Arab League and ultimately members of the European Union – are “mapping out a plan to deliver humanitarian aid” in Syria under the banner of “Friends of Syria.”

On Thursday, Secretary of State Clinton gave her blessing to a move to arm the Syrian opposition. CNN attempted to soften the deadly impact of Clinton’s move to initiate a fresh round of terror and murder by stating that “the opposition will find willing sources to supply them with munitions to counter the Syrian government onslaught blamed for thousands of deaths.”

“There will be increasingly capable opposition forces,” Clinton hinted. “They will from somewhere, somehow, find the means to defend themselves as well as begin offensive measures.”

The latest “Arab Spring” effort to impose a new political order in Syria arrives after months of corporate media coverage portraying the al-Assad regime as murderous while ignoring reports of CIA and NATO snipers killing civilians.

In January, it was reported that MI6, the CIA, and British SAS are in Syria working with the Free Syrian Army and the Syrian National Council to overthrow the al-Assad regime. The Free Syrian Army is widely recognized as a creation of NATO. It is comprised largely of militants from the Muslim Brotherhood – itself an asset of British intelligence – and is funded, supported, and armed by the United States, Israel, and Turkey.

Former FBI interpreter and whistle blower Sibel Edmunds, former CIA officer Philip Giraldi, and a handful of others have reported on the U.S.-NATO-CIA campaign to undermine al-Assad and violently depose his regime, but this information had been routinely ignored by the establishment media.

An advance draft of the Friends of Syria plan calls for al-Assad to agree to an immediate cease-fire or face a “yet-to-be mentioned response” from the “world community.” It recognizes the Syrian National Council as a “credible representative of the Syrian people.”

As we noted last November, the Syrian National Council is supported by the Muslim Brotherhood, which supported the al-Qaeda rebels in Libya and is now working with the NATO installed government to turn that country into another impoverished Arab vassal state indebted to the IMF and the bankers.

In January, Haitham Maleh, a founding member of the executive committee of the Syrian National Council, called for murdering Syrian president Bashar al-Assad, his British wife and three children.