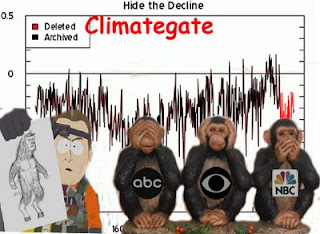 Critics claim: 'The stink of intellectual corruption is overpowering'

Scientist asks, 'What if they find that climate change is a natural fluctuation? They'll kill us all'


More than 5,000 documents have been leaked online purporting to be the correspondence of climate scientists at the University of East Anglia who were previously accused of ‘massaging’ evidence of man-made climate change.

Following on from the original ‘climategate’ emails of 2009, the new package appears to show systematic suppression of evidence, and even publication of reports that scientists knew to to be based on flawed approaches.

And not only do the emails paint a picture of scientists manipulating data, government employees at the Department for the Environment, Food and Rural Affairs (Defra) are also implicated.

One message appeared to show a member of Defra staff telling colleagues working on climate science to give the government a ‘strong message’.

The emails paint a clear picture of scientists selectively using data, and colluding with politicians to misuse scientific information.

‘Humphrey’, said to work at Defra, writes: ‘I cannot overstate the HUGE amount of political interest in the project as a message that the government can give on climate change to help them tell their story.

'They want their story to be a very strong one and don’t want to be made to look foolish.’

Professor Phil Jones, director of the Climatic Research Unit at the centre of the affair, said the group findings did stand up to scrutiny.

Yet one of the newly released emails, written by Prof. Jones - who is working with the United Nations Intergovernmental Panel on Climate Change (IPCC) - said: 'Any work we have done in the past is done on the back of the research grants we get – and has to be well hidden.

'I’ve discussed this with the main funder (U.S. Dept of Energy) in the past and they are happy about not releasing the original station data.'