OOPS!!! Glaciers actually growing all over the world... 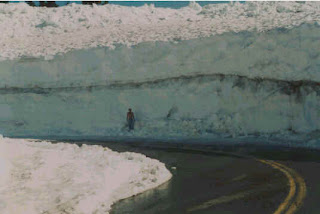 Here's a (partial) list of the
specific glaciers that are growing

(There are many more)

Norway's glaciers growing at record pace. The face of the Briksdal glacier,
an off-shoot of the largest glacier in Norway and mainland Europe, is growing by an
average 7.2 inches (18 cm) per day. (From the Norwegian daily Bergens Tidende.)

Choose "English" (at top of the page), choose "Water,"
then "Hydrology," then "Glaciers and Snow" from the menu.
You'll see a list of all significant glaciers in Norway.
(Thanks to Leif-K. Hansen for this info.)
CANADA
Helm Glacier
Place Glacier

RUSSIA
Maali Glacier (This glacier is surging. See below)

GREENLAND See Greenland Icecap Growing Thicker
Greenland glacier advancing 7.2 miles per year! The BBC recently ran
a documentary, The Big Chill, saying that we could be on the verge of an ice
age. Britain could be heading towards an Alaskan-type climate within a decade,
say scientists, because the Gulf Stream is being gradually cut off. The Gulf
Stream keeps temperatures unusually high for such a northerly latitude.

One of Greenland’s largest glaciers has already doubled its rate of advance,
moving forward at the rate of 12 kilometers (7.2 miles) per year. To see a
transcript of the documentary,
go to http://www.bbc.co.uk/science/horizon/2003/bigchilltrans.shtml

NEW ZEALAND
All 48 glaciers in the Southern Alps have grown during the past year.
The growth is at the head of the glaciers, high in the mountains, where they
gained more ice than they lost. Noticeable growth should be seen at the
foot of the Fox and Franz Josef glaciers within two to three years.(27 May 2003)
See New Zealand Glaciers Growing

ARGENTINA
Argentina's Perito Moreno Glacier, the largest glacier in Patagonia,
is advancing at the rate of 7 feet per day. The 250 km² ice formation,
30 km long, is one of 48 glaciers fed by the Southern Patagonian Ice
Field. This ice field, located in the Andes system shared with Chile,
is the world's third largest reserve of fresh water.
http://en.wikipedia.org/wiki/Perito_Moreno_Glacier

Global Warming? New Data Shows Ice Is Back
19 Feb 08 - A Feb. 18 report in the London Daily Express showed that there is nearly
a third more ice in Antarctica than usual, challenging the global warming crusaders and
buttressing arguments of skeptics who deny that the world is undergoing global warming.
See Most snow cover since 1966

Glaciers growing on Glacier Peak, WA
16 Oct 08 – Email from reader
Before I moved to CO in 2005 it was obvious that the glaciers and snow
had receded and rock was visible in areas all the way to the peak. The glaciers
and snow are back now ... completely covered in white from top to bottom,
and this is after the "warm" summer months here in the PNW.
See Glaciers growing on Glacier Peak, WA

Many people have asked why some glaciers in South America are melting.
I think it is perfectly understandable. Remember, we have had two of the
strongest El Ninos on record during the past 21 years. During an El Nino,
a narrow band of the Pacific Ocean warms by as much as 14 degrees. This
band of warm water travels east essentially along the equator until it slams
into South America.

It seems logical that the increased rainfall caused by El Nino, plus the
warmer winds blowing across the warmer water, could hasten glacial melt.
But let me say it again. I do not believe that this is caused by humans, I think
it is caused by the El Nino phenomenon, which is caused by underwater
volcanism, which is increasing due to the ice-age cycle.

I find it curious that news reports do not mention these two glaciers.

Contrary to previous reports, Arctic ice did not thin during the 1990s, say
researchers at the Department of Oceanography at Göteborg University in
Göteborg, Sweden. http://www.envirotruth.org/images/ice-in-90s.pdf

Click here for hyperlinks in the article:
http://www.iceagenow.com/List_of_Expanding_Glaciers.htm
Posted by Wallyworld