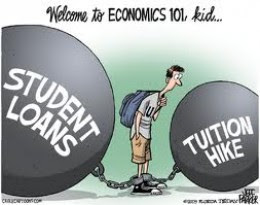 The Columbus, Ohio, native enrolled in his preferred school, The Art Institute of Pittsburgh, to obtain an associate degree in film and video. But five weeks into classes, Stinson, 19, realized that the $12,000 he and his mother saved for his education will cover about two quarters of tuition.

"I just feel stuck. I'm really starting to regret this decision to try for a degree in what I love, because I don't want to be in debt for decades," Stinson said. "Students my age are taking on all these student loans, and we don't even know if we'll get jobs when we graduate. How are we going to pay these back, let alone get car loans or buy houses? It's a vicious cycle."

Student loan debt in the United States outpaced all other household debt in the past decade, including mortgages, auto loans, credit cards and home equity loans. Pair that with an unemployment rate of about 15 percent for 20- to 24-year-olds and the result is what some fear is becoming a "generation of debtors."

"The situation is bad, really bad, and getting worse," said Rich Williams, higher education advocate at the U.S. Public Interest Research Group in Washington. "About 10 to 15 years ago, only about one-third of students needed to borrow money to graduate and borrowers needed only $12,000 on average."

Today, nearly two-thirds of college students have student loan debt, borrowing an average of $27,000, according to Mark Kantrowitz, publisher of FinAid.org and Fastweb.com.

Up to 85 percent of college seniors planned to move back in with their parents after graduating in May, according to a poll by Twentysomething Inc., a Philadelphia-based marketing and research firm. The rate has steadily risen from 67 percent in 2006.

"I think we're going to ultimately be known as the generation of debtors," said Tony Richardson, a student at the Pittsburgh Theological Seminary. "Our credit will be defined by how we pay or don't pay our student loans. It's crippling."

Richardson, a native of London, earned a catering and hospitality degree from Brooklands College in London, where higher education is free. He immigrated to the United States and earned a bachelor's degree in religious studies from West Virginia Wesleyan College, for which he took out $40,000 in student loans.

He's studying for a master's degree in divinity on a scholarship, but is struggling to pay nearly $300 a month on his undergraduate loans while going to school and working at a nonprofit organization.

"It's killing me," said Richardson, 27, of East Liberty. "I have cut back in every way I can think of, and I try to only use books at the library. But the reality is that I know I won't make a lot of money when I graduate, and I'll still have these loans."

George Waldner, president of York College in York County, said he thinks students set the path for future financial trouble when they enroll in classes.

"It's nice to major in something you're interested in, but you have to think about the employment ramifications," Waldner said. "If you get yourself $80,000 in debt getting a liberal arts degree and just hope for the best when it comes to jobs, that's a hard row to hoe right now."

Robyn Pisor-Doyle, 37, managed to find a job in her field but can't land a position that pays enough.

"When we head to college, we're taught to live out our dream, to dream big, to do better and be better," said Pisor-Doyle, of the North Side. "No one tells us that those dreams are going to cost a lot, and the loans will add up and the cost of the roof over your head, and your groceries will add up and it becomes a huge struggle. All because you were trying to do the right thing: Go to school, get a degree and get a career."

Michael Zigarelli, professor of leadership and strategy at Messiah College in Grantham, Cumberland County, said he thinks the predictions of generations caught in a cycle of debt and default are over-hyped.

"The current crop of unemployed and under-employed college grads will eventually find professional positions and begin repaying their obligations, just as their predecessors did who graduated during recession years of the late 1970s and early 1990s," Zigarelli said.

"Years from now, their children will attend college, hopefully assuming less debt, but they, too, will eventually take on white-collar jobs and repay their debts, and so on," he said. "It's a system that has worked for generations and I'd fully expect that this will continue, despite the present rhetoric."