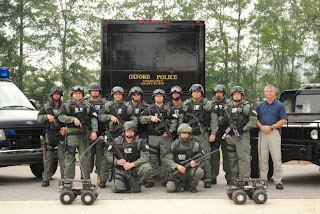 Joe Biden and the Big Lie: Cops are "Outgunned"
Posted by Bill Anderson

Vice President Joe Biden recently declared at a recent PBS event that Congress needs to outlaw "assault weapons" because the police are overwhelmed by heavily-armed criminals. Declared the Veep:

One of the reasons the assault weapons ban makes sense, even though it accounts for a small percentage of gun deaths, is because police organizations overwhelmingly support it because they are outgunned on the street by the bad guys and the proliferation of these weapons.

There is only one problem with Biden's statement: it isn't true, or it isn't true unless criminals are regularly using machine guns, flash-bang grenades, troop carriers, tanks, and other combat material. The following link shows photos of a small cross-section of the military gear the American police are using on a regular basis. Just who is "outgunned" in America these days? It certainly is not the police.