World War III put off until next Spring?

Israel’s plan to attack Iran has been postponed until spring 2013 following a war simulation that showed Iran could kill 200 Americans with a single missile strike, according to a report by senior Haaretz correspondent Amir Oren.

“At 8:58 P.M. on Tuesday, Israel’s 2012 war against Iran came to a quiet end. The capricious plans for a huge aerial attack were returned to the deep recesses of safes and hearts. The war may not have been canceled but it has certainly been postponed. For a while, at least, we can sound the all clear: It won’t happen this year. Until further notice, Israel Air Force Flight 007 will not be taking off,” writes Oren.

According to the report, a war simulation conducted by the U.S. Central Command found that an Israeli attack on Iran’s nuclear facilities would immediately be followed by an Iranian missile launch that would kill 200 Americans, a price deemed not worth paying by U.S. generals.

During the same meeting, Israeli Defense Minister Ehud Barak also acknowledged that Israel would not act alone in striking Iran before the U.S. presidential elections in November, according to Oren, meaning that, “For all intents and purposes, it was an announcement that this war was being postponed until at least the spring of 2013.”

A delay in launching the attack until next spring would scupper expectations that the military assault was set to take place before the end of this year, a time frame that Russia understood the Israelis were working to. Last month, Chief of the General Staff of the Russian Armed Forces Nikolai Makarov stated that an Israeli decision on whether or not to attack would be made before the summer.

In January, the U.S. cancelled a joint military exercise with Israel which was perceived by many as a sign that the Americans were getting cold feet.

Earlier this month it was also reported that Israel had “agreed to hold off a strike on Iran’s nuclear sites this year in exchange for receiving U.S. military equipment,” including bunker-busting bombs and refueling planes. The deal was seen as a tacit admission that the Obama administration would support Israel in launching the attack but only after the election in November.

If a decision has been made to postpone the attack, expect the United States to withdraw at least some of its naval might from the Persian Gulf. The U.S. currently has the USS Carl Vinson and the USS Abraham aircraft carriers patrolling the Strait of Hormuz, along with the USS Makin Island, a Wasp-class amphibious assault ship. Earlier this month it was announced that four additional mine countermeasure ships were also heading for the region.

As the Stratfor Naval Update map below illustrates, the USS Enterprise, which many speculated was also heading to the Strait of Hormuz in preparation for a strike on Iran, is now scheduled to visit Piraeus, Greece instead, suggesting a cooling of tensions could be taking place – at least for the time being. 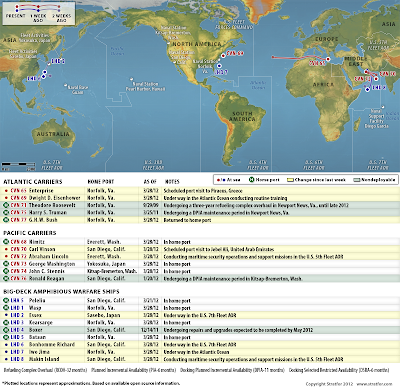