Like we really need to be starting a race war over this...

We are in the midst of a global economic meltdown, we are on the verge of World War III over Iran, three nuclear power plants continue to melt down in Japan and yet this incident is occupying the headlines? People sure got tired of Tim Tebow coming to the Jets real fast. Get a grip folks. Inter-racial killings are very rare. You would think this stuff goes on everyday. Would there be such an uproar and all this media attention if Zimmerman was the victim? There is a good possibility this was a shooting in self-defense and the shooter was Hispanic. The White House has no jurisdiction in this issue so it should stay out of it. Nothing like rallying the base just before election time. I got a feeling this is going to be a long hot summer around the United States for many reasons... 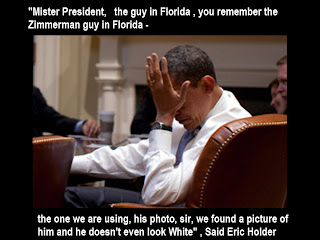 When Muhammad was asked if he was inciting violence against Zimmerman, he said: “An eye for an eye, a tooth for a tooth.”

The party, led by Dr. Malik Zulu Shabaz of Washington, D.C., is taking donations from black entertainers and athletes and hope to collect a million dollars by next week, according to the newspaper.

Sanford, Florida, authorities said any attempt “by civilians to take any person into custody may result in criminal charges or unnecessary violence.”

The shooting has set off a nationwide debate over race and justice, reports MSNBC. Rallies in support of prosecuting George Zimmerman were held on Saturday in Washington, Chicago, Dallas and Tampa, Seattle, Baltimore and Atlanta.

Zimmerman’s legal adviser, Craig Sonner, told CNN on Friday that Zimmerman has stated he is not a racist.

In 2008 during the presidential election, a nightstick wielding New Black Panther member was caught on video intimidating voters at a poll in Philadelphia.

In January of 2009, the Bush Justice Department invoked a section of the Voting Rights Act to file a civil lawsuit alleging voter intimidation, but the case was scaled back after Obama took office later that month.

A lawyer hired by the Justice Department told the New York Times the case was watered down because his former colleagues did not want to protect white people’s civil rights.